Home » About Us » Parish Founding/History

A Brief Accounting of the Founding of our Parish 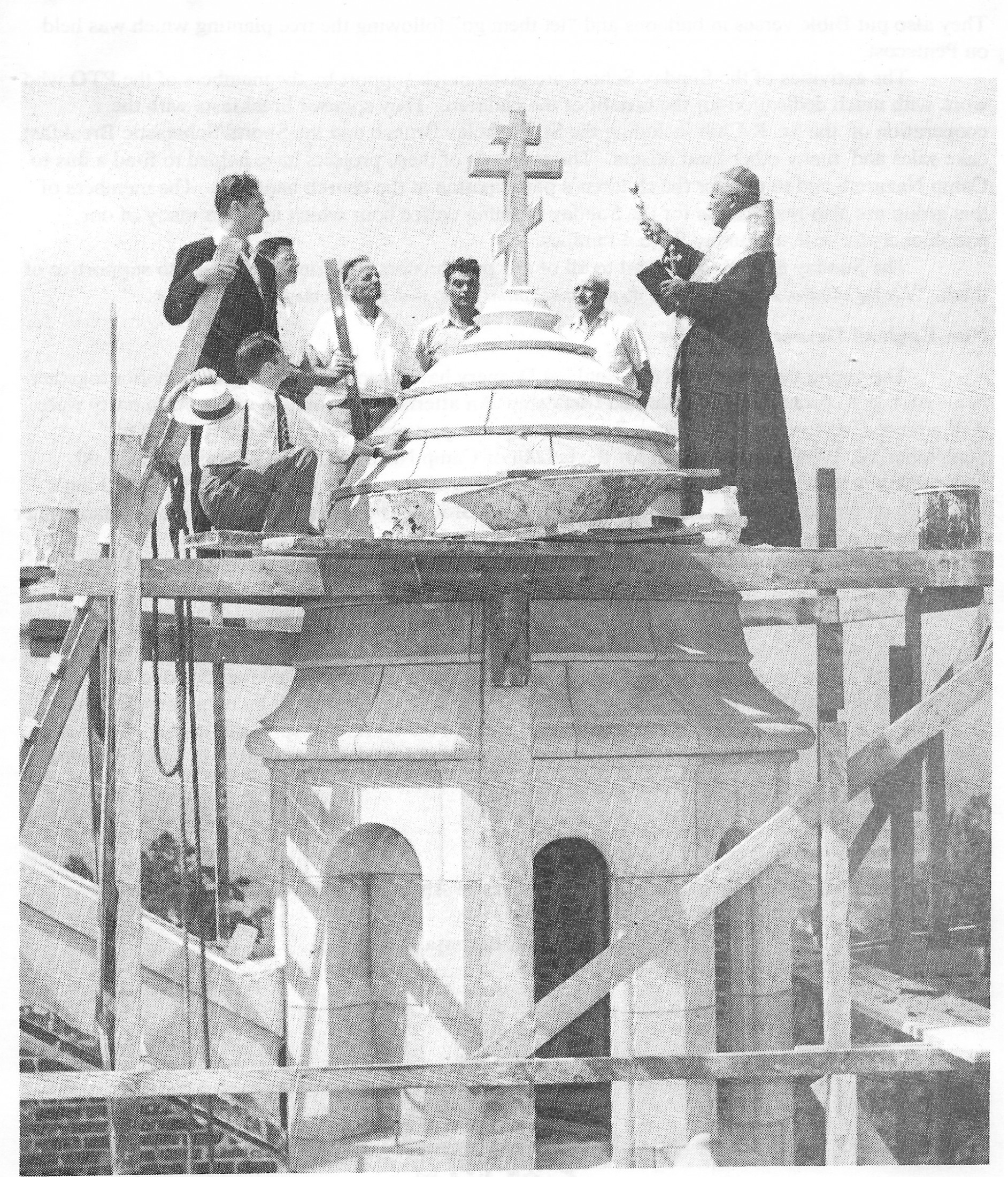 The first group of Carpatho-Russians entered Bridgeport early in 1880. These first Russians were called Carpathians because they emigrated from the Carpathian hills of Central Europe. As a minority group living in a small territory, they were at various times in history subjects of Austria-Hungary, Poland, and Hungary. After World War I, the state of Carpatho Russia was annexed to the newly formed nation of Czechoslovakia. After World War II, the territory was divided--the eastern part became a part of the Soviet Ukraine, the western part remained annexed to Czechoslovakia. But in spite of years of subjugation and persecution, the remarkable fact is that these people never lost their Slavonic-Russo heritage and traditions.

A colony of these people settled on the east side of industrial Bridgeport. The group started a congregation, with the first services held in a rented store located at Pembroke and Hallam Streets. Rev. Eugene Volkay became their first priest but remained with them for only a short time. Until the arrival of the new pastor, Father Alexius Dudinsky, members of the group attended services in various East Side churches. Father Elias Goidich and Father Paul Staurovsky followed. Property was purchased on Arctic Street near Hallet Street and 1907 saw the beginning of the erection of a new church. Rev. Orestes P. Chornock became pastor in 1911 and remained until March, 1947.

It is noteworthy that at this time similar groups of Carpatho-Russian immigrants established churches and communities all over the United States during these same years, at the turn of the twentieth century just before the outbreak of World War I. Most of them went into the coal fields of Pennsylvania, gradually spreading into the Midwest. Wherever they settled, their first concern was the need of a place of worship. To them, the church was a foundation of faith and the center of fellowship.

The question of ecclesiastical affiliation was an unsettled one. Loyalties were divided by either adhering to the See of Rome, thereby becoming “Uniates”, or recognizing the jurisdiction of the Russian Orthodox Church which was already firmly established in America. The tie with Rome was never considered a close one, but rather tenuous. To the faithful, the Mother Church was not Western-Latin, but Eastern-S lavonic. The worship, various rituals, rites, customs, and traditions are all derived from Eastern (Byzantine) sources. In the year 1646, the Pact of Ungvar was signed by the hierarchies of Carpatho-Russia, without the knowledge of the laity and parish clergy, which severed the Church from the East and submitted it to Rome’s ecclesiastical jurisdiction.

In America, the arrival of Bishop Soter Ortynsky as a representative of Roman affiliation precipitated so much dissension that numerous Uniate communities joined the Russian Orthodox Church. His vain endeavors to introduce more stringent ties to Rome caused him to be recalled V and for several years the Very Rev. Gabriel Martyak of Lansford, Pennsylvania, performed ably as an administrator.

The early 20’s marked the arrival of Bishop Basil Takach who visited Bridgeport in1924. His coming set off an even more stormy disruption than the one provoked by Bishop Ortynsky. He had come as Rome’s emissary determined to establish a control more in keeping with the Vatican’s desires. His first measure was to require that celibacy henceforth must be a discipline of the Greek Catholic Church. His explanation was that married priests with families were a source of envy to the Latin Roman Clergy. The Pope, therefore, issued a decree that candidates for holy orders in the Greek Catholic Church in America would have to remain unmarried. Sons of parishioners who had completed their seminary studies were affected by the decree.

The years that followed resulted in the most trying and saddest period of our church life in the United States. However, it also brought vision and religious freedom to a people who loved God and their religious heritage. The ‘union” with Rome was always a foreign, tenuous and alien alliance. The Bridgeport parish came to the forefront in defending the right of the clergy to marry and safeguarding the Eastern rite against the encroachments of Latinization. It joined forces with other parishes headed by the Russian Greek Catholic Brotherhood, a fraternal society located in Homestead, Pennsylvania, and commonly called the “Sojedinenija, which played a prominent role in the history of American Carpatho-Russians. However, religious differences resulted in the formation of new fraternal societies, most prominent among them the Russian Orthodox Brotherhood of Pittsburgh and the Russian Orthodox Catholic Mutual Aid Society of Wilkes Barre, Pennsylvania, which seriously impaired the strength of the old “Sojednenija.

The conflict with Rome reached its climax when several valiant priests who had been defending the Eastern rite were suspended. Among them were the Reverend Fathers Orestes Chornock, Stephen Varzaly, Peter Molchany, Ireney Dolhy and John Soroka. Church Congresses held in Pittsburgh in 1932 and 1934 refused to abide by these suspensions and made strong appeals to Rome for justice and reconsideration. But Rome had spoken--the matter was finished as far as the Vatican was concerned.

On November 23, 1937, another Congress of Churches convened in the Pittsburgh YMCA severing all relations with the Pope of Rome and proceeded to nominate Father Chornock as its bishop-nominee. In Constantinople, on September 18, 1938, Father Chornock was consecrated a bishop and installed two months later on Thanksgiving Day. Meanwhile, a minority of local Uniates and their Roman Catholic supporters instituted civil suit to gain control of our parish properties. A census of parishioners was taken and 99 2/3% donated money for legal services. After months of litigation, the court ruled that the church, rectory, and school were legally titled to the Roman Catholic Diocese of Hartford. The Parish’s subsequent appeal to the U.S. Supreme Court was also denied.

The parish, having been denied bank loans for the building of a church, resorted to its own means to finance construction. As a result, on December 24, 1944, an announcement was made to the parishioners that loan certificates were ready for issuance. In two weeks, over $200,000 was raised. In addition to the loan certificates that were issued, an assessment of $150 per family and $100 per single individual was levied toward the cost of the construction. Final negotiations were made for the purchase of the land and property at 348-358 Mill Hill Avenue, and ownership thereof was deeded to the church corporation. This purchase included a home which was designated as the Parish Rectory and subsequently used as a Seminary. Students of the seminary when it was located in Bridgeport were the Very Reverend Protopresbyters Stephen Sedor, John Yurcisin, Stephen Dutko, Elias Kozar, Michael Sopoliga, Peter P. Buletza, Michael Hanas, John Dolhy, Reverends John Hotrovich, Stephen Kolcun, Frank Meszaros, John Matey, Peter Hotrovich, and Andrew Sabak. Dedication of the new church took place on June 2, 1946.

Later, other properties were purchased, including a house and adjoining lot in the rear of the church and a Recreation Center on Barnum Avenue.

The chorus was first organized by former Choir Director/Cantor, Prof. Andrew M. Griz who felt that in a parish of our size, it would be possible to form an all-male chorus. The first rehearsal was held on May 14, 1957 with the goal of performing just two months later. The Male Chorus made its initial showing on July 14, 1957 at the historic Ritz Ballroom in Bridgeport at a church dinner celebration marking the “Burning of the Mortgage”. Not long after, the St. John’s Board of Directors then assigned the chorus to sing the Divine Liturgy responses in English the first Sunday of every month, a tradition that continued for over 25 years...To read the entire article click on the Male Chorus picture on the left.